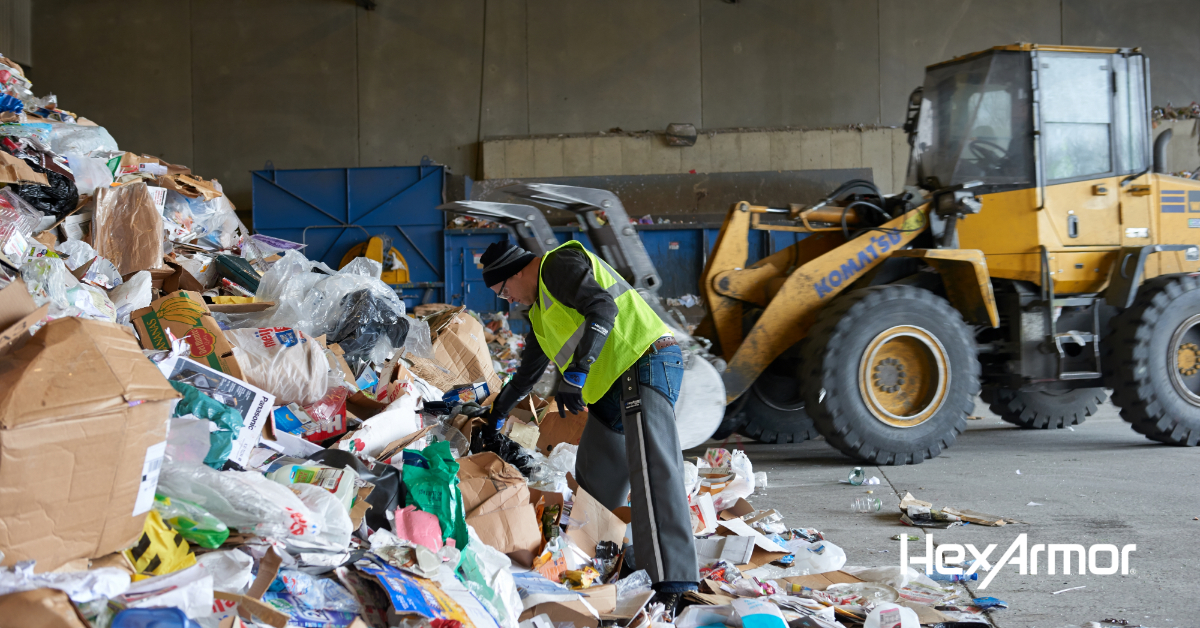 Granger’s Director of Safety, John Parmer, could hardly believe it. “It was like Christmas morning the day we handed out the new HexArmor® safety eyewear to our operators, mechanics, and drivers. They were so eager to get their new PPE.”

But it wasn’t always that way.

Over the past two and a half years as the Director of Safety at Granger Waste Services, a Michigan-based waste and recycling hauler, John had seen a lot of safety eyewear come in and out of Granger’s facilities. Workers were doing a good job of wearing their PPE over their eyes, but each person had a different low-cost version of what they liked best. John and Angie Schwab, Granger’s Safety Coordinator, were faced with a bigger issue outside of the multiple brands of safety eyewear they were utilizing – they could not keep up with the demand of the amount of eyewear that was needed.

“We’d go through boxes and crates of safety eyewear like crazy,” explained John. “Associates were tossing them up on their dashboard or putting them other places where they’d constantly be getting scratched.”

As soon as the lenses were scratched, they’d be ineffective, and employees would ask for a new pair nearly every day. “We just hadn’t found a good solution yet,” he added.

After a few initial conversations with HexArmor® solutions specialists, they were introduced to HexArmor® safety eyewear - the MX300, a sleek, modern frame with maximum protection and comfort. A few of Granger’s longtime associates were asked to trial a couple of pairs and then give honest feedback to John and Angie. The associates loved them. “Word started getting out. People kept asking us where they could also get a pair,” said John.

Associates loved the way the eyewear looked, fit, and how comfortable they were. Lenses were no longer fogging up due to body heat, and the scratch-resistant hard coating on the exterior of the HexArmor® lenses even passed the “dashboard test.”

Outside of the comfort, fit, and style of the eyewear, John mentioned that they “loved the brow guard [on the MX300] for the guys who are working underneath trucks.” Many of the associates at Granger wear communication headphones on the job and were commenting on how good the eyewear felt underneath their headphones – the compatibility was a huge plus.

With all the positive feedback about the eyewear, John and Angie decided to take the plunge and place their first order. They were hesitant about ordering at first due to cost compared to their prior purchases– and associates typically weren’t known for taking great care of their current eyewear.

After working through a distributor and realizing that the associates who were trialing the HexArmor® eyewear were treating it like their favorite pair of sunglasses – they decided to move forward. Once the HexArmor® safety eyewear made it to the Granger facility, people couldn’t wait to get their hands on them.

John and Angie couldn’t believe it. “It’s just been fun to watch. It’s not something safety people get to see very often… people getting excited about PPE,” he said. “Associates were even wrapping them up and putting them in their lunch boxes to keep them safe.” Granger was also impressed with the longevity of the eyewear.

“I kept thinking we were going through them so fast… just like we used to with our old eyewear. But then Angie told me we still had 20 left in our original box – and it had been three or four months already! It was unbelievable,” said John. “Our eyewear program isn’t 100% yet, but it’s much improved.”